Luke Jolliffe grew up in the Clare Valley wine region and completed his Bachelor of Agricultural Science (Viticulture major) at Adelaide University. After graduating in 1999, Luke joined Hardy’s Tintara operation in McLaren Vale as Viticultural Technical Officer, where he stayed until 2003. Whilst working at Tintara he also completed his Post Graduate Degree in Oenology. Luke later jumped at the opportunity to work in Western Australia as a Viticulturist. However after a vintage in the Rh 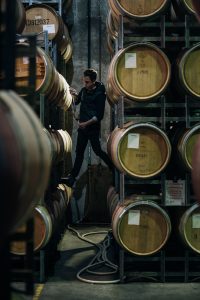 ône Valley in 2005 at Raymond Troillas, based in St Joseph his focus turned to winemaking. In, 2007 an opportunity arose with Stella Bella to work as a vintage assistant which he embraced, quickly being promoted to Assistant Winemaker in June 2008, Winemaker in November 2009 and finally Chief Winemaker in July 2013. His winemaking philosophy is one which embraces the privileged terroir of Southern Margaret River with an uncompromising eye for detail and focuses on viticulture and winemaking technique.

This entry was posted in Uncategorized. Bookmark the permalink.