Chuck Hayward is the proprietor of Vinroads, a consulting outfit dedicated to the sales, marketing and education of Australian and New Zealand wines in the United States. For over 30 years, he has been widely acknowledged to be America’s foremost expert on New Zealand and Australian wines. Former Los Angeles Times wine critic Dan Berger says, “The real star is Chuck Hayward, who knows more about Austr 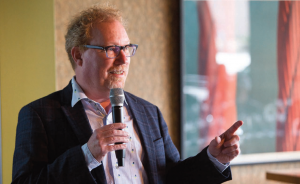 alia and New Zealand wines than anyone in North America.” Linda Murphy (who co-wrote “California Wine” with Jancis Robinson) agrees declaring, “I can’t think of anybody in the United States that knows more about Australian and New Zealand wines than Chuck Hayward.” And Patrick Comisky, in his recent book “American Rhone: How Maverick Winemakers Changed the Way Americans Drink” observed that Chuck “is one of the foremost experts on Australian wine in the U.S.”

Prior to setting up his own business, Chuck was the Australian and New Zealand wine buyer for JJ Buckley, one of the largest internet-based fine wine retailers in the United States based in Oakland, California. Between 1986 and 2009, Chuck was the wine buyer for The Jug Shop in San Francisco and during that time, The Jug Shop gained national and international recognition for their Australian and New Zealand wine program. He also founded Tasman Wine Selections importing wines from small domains in Australia and New Zealand for the US market.

As part of his professional responsibilities, Chuck has spoken at major national and international wine symposiums including the New Zealand Pinot Noir Conference, the Wine Communicators of Australia Awards, New Zealand Wine Exporters Forum and the International Screwcap Symposium. Numerous newspapers and magazines have reached out for Chuck’s knowledge and opinions including the Wine Spectator, The Fine Wine Review, and Decanter as well as the New York Times and the Wall Street Journal. He was recently named as one 50 Masters of Place by Wine & Spirits Magazine.

As proprietor of Vinroads, Chuck will continue conducting educational seminars for both the trade and consumers with a special emphasis on New Zealand and Australian wines, while consulting with wineries, importers and distributors on strategies to improve their distribution and sales in the American market.

This entry was posted in Uncategorized. Bookmark the permalink.